The larger the indent left by the indenter at a defined test force in the surface of a workpiece (specimen), the softer the tested material.

In order to determine the Vickers hardness (HV) according to ISO 6507, the pyramid-shaped indenter (with interfacial angle of 136°) is pressed into a specimen (workpiece) with a defined test load from 1 gf.

Calculation of the Vickers hardness

The Vickers hardness (HV) results from the quotient of the applied test force (F in newtons N) and the surface area of the residual indent on the specimen (see formula below). To calculate the surface area of the residual pyramidal indentation, the average of the two diagonals (d1 and d2 in mm) is used, because the base area of Vickers indents is frequently not exactly square.

The recommended Vickers hardness range can be found in the standard (ISO 6507). Depending on the test force and specimen material used, The Vickers hardness value lies between 1 and 3.000 HV. 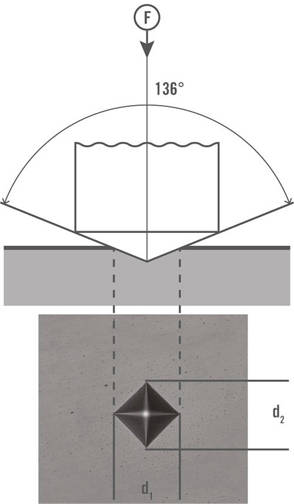 Application of the Test force

Ideally, the test force is increased from 0 to its final value within 7 seconds (minimisation of measurement uncertainty). The maximum permissible interval for application time from the standard is 2 to 8 seconds (nominal time duration 7 s). Generally, the dwell time for the test force is 10 to 15 seconds (nominal time duration 14 s). If the dwell time is any longer, the duration in seconds must also be specified in the hardness value, e.g.: 610 HV 10/30 (dwell time of 30 s).

The test forces used in the macro range in the Vickers method are mostly substantially smaller than those used in the Brinell method. The preferred choice for the macro range is 49, 98, 196, 294, 490 or 980 N, with 294 N being used most frequently for testing in practice.

Minimum distance of the test points

In the Vickers test method, the indents must be positioned such that there is sufficient clearance from the specimen edge and between the individual indents. The minimum values to be observed in accordance with the standard can be found here.