Case-hardened components are heat-treated steel workpieces. Here the workpiece is carburised, hardened, then tempered. This produces a hard, wear-resistant surface, while the core remains relatively soft and tough.

Case hardening is used on non-hardenable steels. Carburising with a carburising medium (e.g. gas or packing into carbon granulate) at a temperature of 850°-950°C, enriches the surface layer with carbon atoms. These diffuse from the enriched surface layer into the core. The result is a noticeably decreasing carbon profile from the surface to the core. Next the workpiece is hardened. This produces a deliberate change and conversion of the structure in accordance with the amount of carbon in the surface layer. After hardening, the workpiece is tempered in order to increase toughness and relieve internal stress.

Determination of the Case Hardness Depth is defined in standard ISO 2639.

The Case Hardness Depth (Chd) describes the vertical distance from the surface to a layer with a limit hardness of 550 HV. This is derived graphically from a curve. 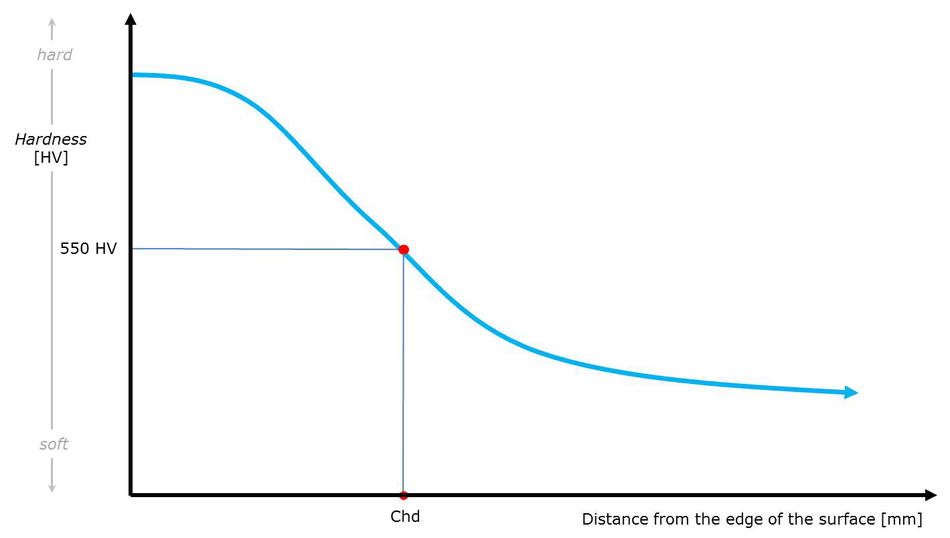 The surface of the specimen to be measured must be finely machined.

To the general tips

Subsequently, hardness indents are applied at precisely defined distances; see illustration below. The test method to be used can be both Vickers and Knoop with a test force between 0.98 - 9.8 N.

The Case Hardness Depth (Chd) is derived from the curve representing the hardness in dependance  of the distance from the edge of the specimen surface (edge distance) by measuring the edge distance up to a limit hardness of 550 HV or the corresponding Knoop hardness value.